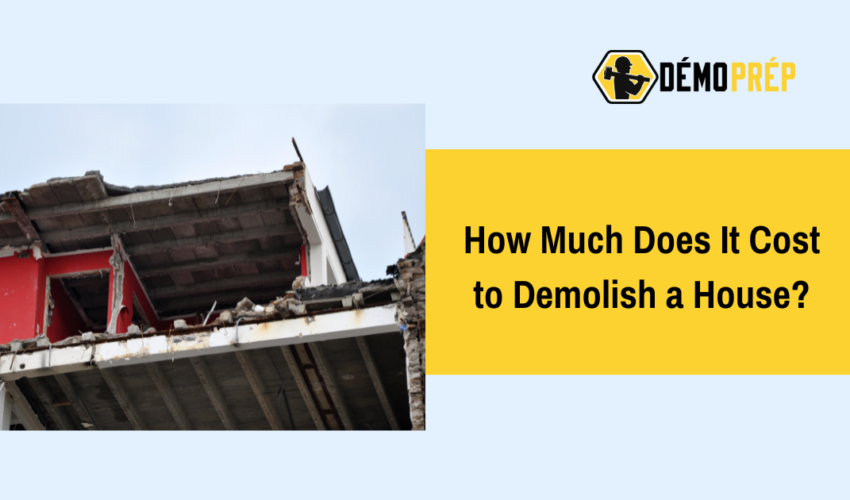 How Much Does It Cost to Demolish a House?

Neighborhoods in Canada, especially places in and around Montreal, West Island, Laval, South Shore, and the smaller towns like Dorval, Hudson, Hampstead, etc. are developing and getting more and more congested. Under the circumstances, you may take years to zero in on your dream house. Even if you manage to find the perfect spot, the house there may not quite be what you had in mind. That’s when you should consider demolition. You may reconstruct the interiors to create a home that you had dreamt of. However, it involves a cost and that’s what we’ll be discussing.

The cost of demolishing a house varies widely. The major deciding factors are the location of the building, the home and the land’s size, and the place’s climate. You need to create an understanding of the costs and the factors that decide them.

The average cost of demolishing a house varies anywhere between $5,800 and $36,000. Houses located in smaller towns and rural areas like Kirkland, Dorval, Lasalle, Hudson, etc. have a lower cost of demolition. However, in the bigger cities like Montreal, West Island, Laval, South Shore, etc. where the localities are congested and hence, the risks involved are higher, the demolition cost of the houses is higher. The costs are higher for a complete demolition which shall include the basement and the foundation. Almost all demolition projects are charged per square foot.

The average per square foot rate varies between $7 and $22. Hence, to form an accurate estimate of a base budget, taking a full measurement of the house is necessary. Since we have formed an idea of the average costs, let’s look into the specifics.

Permits and Preparing the Site

Before you proceed with a complete or partial demolition, registering for the required permits is a must. There are a lot of factors involved behind this—the noise that’ll be created by the demolition, precautions for safety, the possibility of being exposed to dangerous materials, and the interruption caused in your neighbor’s daily lives. It’s mandatory that demolition regulations comply with municipal building codes, and applying for the required permits is an indication of an agreement to abide by them.

The demolition may at times be a part of a bigger project like remodeling a home. In such cases, the demolition permit is included as a part of the entire project. Applying for permits costs money in a majority of cities including the big ones like Montreal as well as the smaller ones like Hampstead. Where you live decides the cost which may range between $60 and $300. Make a note of the point that demolishing foundations pushes up the cost of the permits and you may need separate permits altogether.

Preparing the site involves considering factors like gas, water, electricity, and HVAC units. Plumbing and electricity tasks shall have to be performed by professionals in the respective fields. A complete demolition requires everything to be turned off. Everyone working on the site must be provided with the necessary safety gear including gloves, boots, and protective headwear and eyewear. Professionals working on the project need to possess the proper certifications.

Working with hazardous materials is another factor that has a major impact on a demolition project’s cost. Asbestos is almost always found in older homes and if its presence is detected, extra charges need to be paid. Asbestos floats in the air when it’s handled and not only is it a threat to you and your family’s health, it’s a threat to the environment as well.

For many homeowners, deconstruction offers a more financially feasible option. Deconstruction and demolition are often confused. Hence, we explain the two processes to you.

Demolition: Demolition implies completely tearing down an entire structure or a portion of it. The debris left over in a demolition project is what we call waste.

Deconstruction: This involves a slow tearing down of a structure. It’s done in a manner that ensures preserving certain parts of a bigger structure that can be recycled or sold later.

Demolition is a quicker and cheaper process that can be completed in a day or two. On the other hand, depending on the structure that’s being deconstructed, the process is time-consuming and it may take up to a few weeks. Being time-consuming, deconstruction costs you more upfront. The process however comes with tax breaks or benefits. Besides, selling the pieces you manage to salvage can help you recover some of the costs. Again, deconstruction is environment-friendly as well.

When you’re remodeling a home, you may need to demolish it only partially. Such demolitions involve preserving a home’s small section and hence it needs careful planning while the costs are more. They typically get you tax relief. Let’s take a peek into partial demolition.

Various factors decide how much a building demolition shall cost, the major ones being the climate, the size of the house, and its location. Before you proceed with the demolition, you should form a clear understanding of the factors involved and be aware of the average costs as well. The permits you need and the site preparation, and handling of hazardous materials, whether it’s a demolition or deconstruction job influence the project cost. Partial demolition has its costs. Awareness ensures that you don’t overshoot your budget.